How to Build an App for The Internet of Things (IoT)

Technology has crossed the boundaries of imagination. Mind blogging innovation and impressive implementations are building lives better. The interesting thing is the integration of innovative ideas into the existing system. The traditional technical advantages are streamlined with interconnected devices, where the reach of the network increases.

Interconnecting devices and maintaining interdependencies brings a huge revolution. If you are curious about how to build an IoT app, this blog will be helpful intake the right decision.

The 21st century has brought the Internet of Things to the forefront. People are enjoying automation with the help of several devices and their networks. Such as Alexa has impressively entered into the general lives. Users can accomplish small tasks with the help of Alexa.

Here is a quick knowledge of the things you need to consider for developing the app for the Internet of Things.

What is The Internet of Things?

Internet of Things refers to the process, where sensors, electric gadgets, and other similar devices are interconnected through wireless. The data is shared between the devices through a wireless medium that makes the real-world objects behave accordingly. You can turn on/off any device through IoT.

As per the reports made available by Marina research, IoT is estimated to accrue around $3 trillion by the year 2025. Online investment is heading towards IoT and every industry is looking at IoT (Internet of Things) as a great opportunity to rebuild customer infra.

IoT market is gaining the highest growth in smart home premises because it is changing the way people live their lives, drive cars, work and amuse themselves. The number of connected devices is growing and all require an app. You can hire IoT developers and enjoy seamless growth.

IoT is a unified technology that comprises multiple components. Here are some important components of IoT. 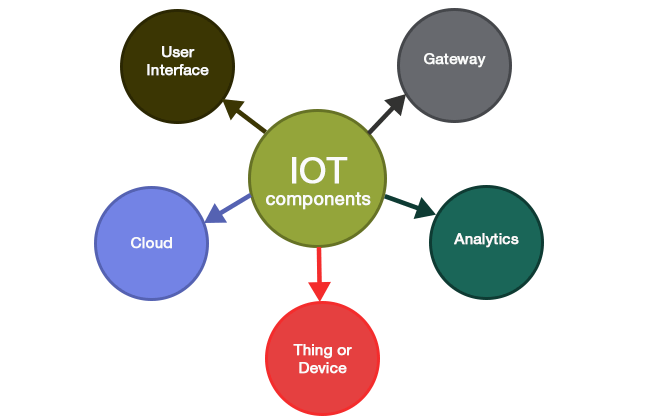 How does the cloud work?

Cloud collects the data in real-time and processes it for relaying over the network. The platform is usable when the data needs are high and scalable. For the huge transmission of data, the cloud is preferable. More requirement of cloud emerges from the requirement of huge data and limited space on the physical infrastructures.

Data is constantly rising and to handle that data multiple data centers are used in cloud infrastructure. Cloud is therefore considered the replacement for traditional hosting spaces.

The network is the bridge component of the IoT.  It is a link between the physical components, where the gadgets are gathered data from varying components and send it over the network. The network untangles the messed-up data and systematically arranges.

Things are the activities in the platform.  Forgiving any instruction to devices such as TV, music player, or other electronic devices, you need to install the specific software and operating system.

Impact of IoT on App development in recent years

IoT devices are generally operated using the mobile app. People prefer to keep access through mobile phones, therefore it is preferable to integrate the device control into the apps. Due to successful apps, IoT is achieving high popularity.

Looking at the popularity of smart home devices, the world is favoring the integrated solution:

Consumers Receive The Best of Class Automation In

How to Build an IoT App?

Many platforms are reliable for building IoT applications. You can choose any platform them which are in mobile app development trends, but you also need to pay attention to the underlying technologies. You need to know what they cost and how much support the platform needs.

Here are a few proven platforms:

The majority of the platforms work for solving the inconsistency and are therefore favored by mobile app development companies. IoT developers can connect devices coming from different vendors, and speaks different protocols, with a unified system. Android Things is an IoT platform by Google. It supports devices from different manufacturers and connects.

On the other hand, Home Kit is backed by Apple, which gives a list of devices approved by Apple along with the guidelines for creating IoT software. Also, Home Kit and Android Things offer APIs for giving developers reach to devices that are out of the ecosystem provided by Google and Apple.

The businesses that are not willing to launch their products need to choose from the available hardware in the market. The device needs to correspond with your requirements. Also, the device needs to be reliable, capable, and durable. It is worth choosing the sensors bubuilty a reliable device maker.

When you launch your app, it will transact a large amount of data. Website development company needs to plan the functionality of the app and ensure that the device stays scalable. Cloud technology is best suitable for IoT data transactions.

IoT app needs to be fast. In IoT devices, all actions are majorly required in real-time, otherwise, it can cause damage. The performance of the devices and corresponding apps needs to be optimum.

5. Keep Security at a High Rate

An IoT app needs to ensure great security. When an app is connected to a device it shares the data that can be reached out for some bad purpose. IoT is vulnerable to the infringement of data, and security is now a greater concern because data is usually related to homes, health care, and vehicle. You need to ensure the use of secured devices for building the Internet of Things app.

Not all vendors offer devices that are perfect for IoT apps. In other words, we can say, that every device cannot be considered reliable for IoT.  Make sure that you choose any credible hardware.

7. Proven IT Platforms are Best

IT platforms are famous for their capability of developing suitable applications and modifying complex things into easier ones. Always ensure the choice of a reliable platform for testing and updating.

8. Look for The Physical Attack

Always there is a threat of network attacks. But you need to ensure the physical security of the device. It should not be easy to remove the storage.

The data transacted between the devices can be interrupted. The networks need to be secure and encrypted over the cloud.

There are some best security practices in the wearable app industry, which save data from trespassing. Encryption, two-factor authentication, obfuscation, and several other techniques ensure IoT apps to barbered.

Challenged Associated With the IoT

Mobile app developers are associating with IoT projects for building better products and enjoy the power of IoT. But before starting any IoT app, you need to understand the challenges associated with IoT apps:

Security is the biggest threat to IoT apps. As per the data released by Brain, the majority of the users stay concerned about security while using the device and implementing the solution.

For IoT consumers, the number of devices is many. Where lack of security protocols and the traditional poorly lack of standard development techniques may compromise the data.

An IoT network is open for multiple tasks and therefore it is too vulnerable over each point.  A hacker can gain access to all your fat data using home devices and can control the whole system.

One major challenge for IoT app development is the incompatibility of the devices.  The issues have not been solved yet. If you are creating an IoT app for home appliance automation, you need to ensure the app is connected to devices. Here the glitch comes. All smart devices cannot connect unless those devices are made by your company.

If your customer buys a smart bulb from a company and the thermostat from any other company, major chances are that they won’t work together. Therefore consumers are limited to only one manufacturer. This technological inconsistency makes fragments the whole IoT industry. Each company has its own set of standards, its , and specific security standards.

Although there are many mobile app development companies in the market, which offer a platform for IoT development. Hopefully, it can make a unified system.

How to Approach IoT Development?

IoT is not a single technology. The full-stack IoT is many times more  vast than the ordinary Full-stack. The complex technology requires a specific set of skills, which sometimes makes it a hard choice to find a good IoT mobile app developer. Also, IoT needs to be secure, therefore the developer you hire needs to be an expert in security mechanisms and network knowledge.

How Much Does IoT App Development Cost?

The cost is directly proportional to the features included in the app. More the number of features, the higher the cost of the app.

3. Hourly Development Rate The most

Most comprehensive cost varying factor is the app development cost. The hourly rate of developers in the tier1 countries are higher compared to the other part of the world. An app costing $90000 in Ukraine may cost around $30000 in the South East Asia market.

When you hire a dedicated app developer from mid-level countries, the cost of an app can be estimated between $15000 and $30000, whereas the complex app may cost more than $30000 and below $80000, which depends on the number of features and above-mentioned factors.

IoT mobile apps are booming high and the technology has taken its inseparable place in the common lives through the wearable app industry.  The integration of technology to the local chores and petty household tasks make it more futuristic.

While developing an app, you need to take care of Security, speed, network stability and several other factors. After reading the above blog you are damn sure how can you build an iot app?

A secure app is trusted by user and the loyalty of the market take time to grow. If users are satisfied, they leave a good review. Therefore always ensure the optimum data security, amazing speed and ease of features before launching the app. Further, you can hire dedicated app developers for sophisticated knowledge of app development.

How to Develop Loan Lending Mobile App? - A Complete Guide