There are numerous mobile apps in the current market, and the entire competition is quite stiff. Businesses are emphatically trying to occupy this market as more number of users are now downloading mobile apps. Most of them try to follow successful apps like Tinder and Instagram, while others have much smaller goals. But no matter whatever the objective is, one thing is certainly clear. The entire app market is exploding at a tremendous rate, and if you wish to succeed, then you need to find different ways to make yourself stand out of the crowd.

But the question arises how exactly to do that? Well, there are few apps which stand out as well as separate themselves from the entire crowd. They easily destroy the competition and also bring businesses to whole new levels. Also, these apps have the usual common features which you can apply to your own mobile app. 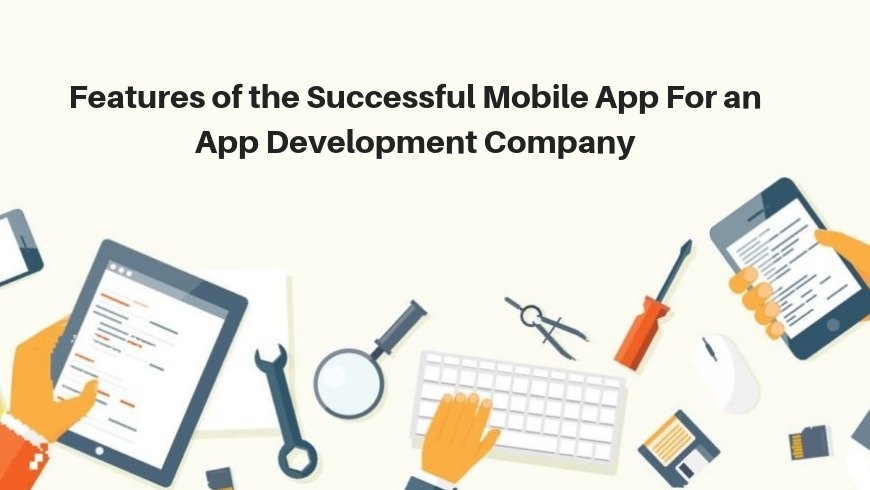 Features of the Successful Mobile App For an App Development Company

The very first impression of almost anything is certainly a significant thing. People often judge the apps within a few seconds of usage. It is just human nature. So, how exactly can your mobile app actually make a great impression? Well, the answer lies in great User Interface or UI.

The way your app actually looks as well as operates is quite crucial to its own success. It is quite true in the case of free apps since there is a much higher churn rate. In case the app actually doesn’t look as well as perform well in comparison to the rival app, the user won’t actually bother to learn more about it and leave it for some other app.

Winning apps always keep this in mind, and the user is often operating with a mobile device which has a small screen. As a result of this, the UI  needs to be unobtrusive, and even mitigating design elements which don’t actually add a user or even a function to the app. In case it fails to add any value, it should be eliminated.

Successful apps majorly focus on the primary app task which is solving the problems of the user or even adding the most value, as well as elevating the most important and relevant content and providing the users with a logical path to follow for much easier navigation. They are quite intuitive. A web and mobile development company should put special efforts into providing a great user interface.

In some cases, apps tend to take a significant amount of time to load, often crashes, freezes and even completely shut down. Such apps are never again used by the users.

In case your app takes a much longer load time, then it will be avoided by the users automatically. Successful apps take almost five seconds to load, not more than that. However, in the case of more complex apps such as Facebook, it takes a bit longer to load as these apps need large amounts of data in order to start up. In the case of Facebook, the users often stick around as they wish to see the ongoing activity whenever they start the app.

Read the blog- How to Build Successful B2B Application

In case this is the case of your own app, then you should consider taking the users to a particular loading screen which actually informs them about the entire loading process which is on. Successful apps are also quite high performing as well as consistent. Apps which constantly freeze are often disregarded by the users. Hire app developers who can ensure that your app doesn’t freeze or shut down in middle of the operation.

Not every user of your app is actually tech-savvy. There will certainly be people who will require your help with their download as well as different pre or even post-purchase queries. A successful app’s customer support will always answer the questions of the users within a few hours and in some cases, within minutes. One satisfactory answer to a question can lead to a sale or even an app recommendation.

Read the blog- Mobile app development ideas for 7 industries, which can run in all situations like Covid-19

Creating a successful app is quite great, but in order to maintain success, it can be a bit tedious. Successful apps keep on introducing new features, along with bug fixes and even streamline the entire way they actually operate with every update. A mobile app development company should always keep on adapting to user requirements.

A successful mobile app is entirely compatible with any mobile platform for which it is developed. It keeps all the necessary aspects of the particular platform in mind and also takes the entire advantage of various natural qualities of the mobile devices. Hence, it provides the best possible UI experience to its users. Whenever you are creating a mobile app, you should pay special attention to the features as well as traits of the platform along with the work environment and guidelines. Hire app developers who know how to make an app which is compatible with a mobile platform.

Features that are common to on-demand apps

Other features of the successful mobile app we consider most includes-

1) Simplicity for the user

The mobile development services work on the criteria of simplicity and convenience along with assisting the users to the maximum.

Successful mobile applications do not keep users on hold for too long to load. If an application fails to load within a few seconds then it is obvious that the user will categorize it as ‘rejected’.

Security and support system is crucial in all the applications. Security refers to the fundamental theme of protecting the data. Seamless support attends to the cause of assisting customers whenever they require hints prior to installation or download.

Analytics is an app which allows tracking the users and access entire data within their conduct.

An efficient application is compatible with all the development frameworks along with reliable user interface experience to its users.

The application marketplace is overstuffed with the app development products but it doesn’t clearly mean that it has no window for your application. With the advent and increase in mobile services, the opportunities for the latest applications are also growing significantly. At Dev Technosys, we ensure delivering end-to-end app development services to the users.

The app marketplace is entirely cluttered with stiff competition, but this doesn’t mean your app can’t become successful. Mobile usage is increasing exponentially, and the overall opportunities for mobile apps are growing rapidly. If you wish to develop a successful mobile app, then consider these above-mentioned features.

What Entrepreneurs Should Follow When Setting Up an On-Demand Startup?