When the pandemic hit the world in the most unprecedented ways, video conferencing became the new utility tool. Be it school, work, or entertainment, video calls were the manna from heaven for the entire world as everyone was confined to the walls of their homes.

This was not an easy task but somehow, a few applications rose in popularity and usage like never before. Applications like Google Meet, MS Teams, and many others were used for having multiple features that benefitted us all to communicate and work efficiently.

But the one app that took first place in the video conferencing app development race has to be the Zoom app developed by Zoom Video Communications.

Zoom app was used abundantly at the start of the pandemic and gained momentum for its unique features. The video streaming app development done by Zoom Communications gained popularity because of having the first-mover advantage and the right marketing. Features like a 150 person room for video conferencing and audio and video designs made it extremely popular.

What Is Video Conferencing?

Video Conferencing is when two or more people can have a conversation over two devices in two different locations and can not only hear but also see each other.

The technical term for this is ‘video-telephony’, according to which video conferencing is the technology of transmitting audio-video over two devices at different locations by users in real-time.

When the pandemic hit, IT companies were forced to work from their respective homes, and hence the team effort to further one’s organizational goals was disrupted. 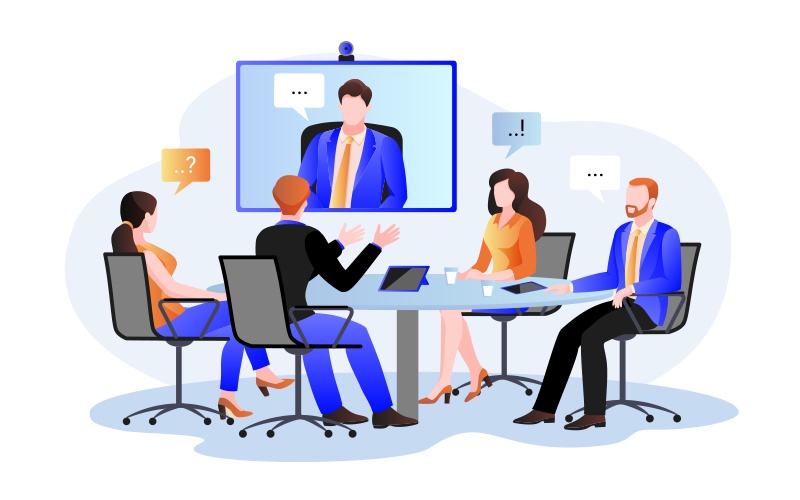 Therefore IT companies turned to these video streaming apps since all of them could not hire dedicated developers and build their own software.

A  video conferencing app has many special features and benefits that have helped people from all over the world to continue their studies or conduct business operations even if they are in two different corners of the world.

Video conferencing apps are loosely based on the sharing principle that was adopted by music streaming app development company.

All developers wanted to enhance the video streaming experience by adding sharing features and data saving benefits. Let’s take a look at a few features of video conferencing applications.

This is one feature that even mobile app developers for hire could not compete with. To make sure that the video conferencing app provides the sort of experience that is close enough to actual reality, the hand-raising feature was introduced.

Therefore, in a video conference consisting of a large number of people the presenter or moderator can conduct the meeting peacefully by asking people who wish to speak to raise their hands. This has helped in the conduction of online classes for schools and colleges in an orderly manner.

If we are talking about classes and meetings on a video call, then the need for a blackboard cannot be eliminated. Whether it’s a PowerPoint presentation or lectures, screen sharing helps to showcase modules or presentations.

Therefore, the attempt at creating an app that is so close to real-time operations is commendable. Any mobile app development company can make good use of this and conduct or even launch new products.

The business operations may have slowed over the course of this pandemic but fortunately did not stop altogether because of such video conferencing apps.

This feature completes the whole package. With this feature, the whole social media experience is now conducted in a professional way. Most video conferencing apps contain the feature of chat along with audio-video calls.

With this feature, participants can share links, chat, and communicate effectively without having to cause interruptions in the meeting. The need to altogether switch to other apps is eliminated because of such features. This has taken video conferencing apps one step further than simply sharing like done through chatbot app development.

Any person who is a part of a meeting on video conferencing apps can record the whole meeting for further references which has also made it easier for students and employees to take notes.

Features like this one have elevated the standards for ondemand app development. This has also enabled courts to hold hearings and hospitals to conduct conferences across the world.

Events like debates, panel discussions, and seminars can also be conducted through this app, and participants and audience can feed their responses through the poll feature. How more convenient could it be for a mobile app development company to make an app comprising these many features!

We have all heard of uninterrupted listening or add free videos. But how to take care of disturbances that are not virtually embedded and are happening in real-time? The answer is very simple – mute them.

Background noises or interruptions through other participants can be muted by the host of the meeting. One need not hire dedicated developers to add extra features since it’s already there.

The basic features like video and voice calling along with turning the camera off or switching the mic off are available to each participant.

All kinds of industries and offices need to communicate with their employees that are based in several parts of a city or even abroad because services are now heavily outsourced.

In such a scenario, communication is made easier with video conferencing apps. Healthcare, education, IT, HR, and many more sectors can take benefit from these apps to ensure the smooth functioning of organizations.

A company operating through Zoom can easily set up their company profile on the video conferencing apps and also choose the color and company logo to showcase their company’s profile.

Separate backgrounds portraying the company in any way can be chosen for the presenter or attendees and all this can be done with a minimal development cost and with a subscription for unlimited meeting time.

With this, we have looked at the plethora of tasks one can perform through video conferencing apps. The need for an on-demand app development company is reduced and more can be done from the comfort of one’s home and not risk life in the situation of a pandemic. 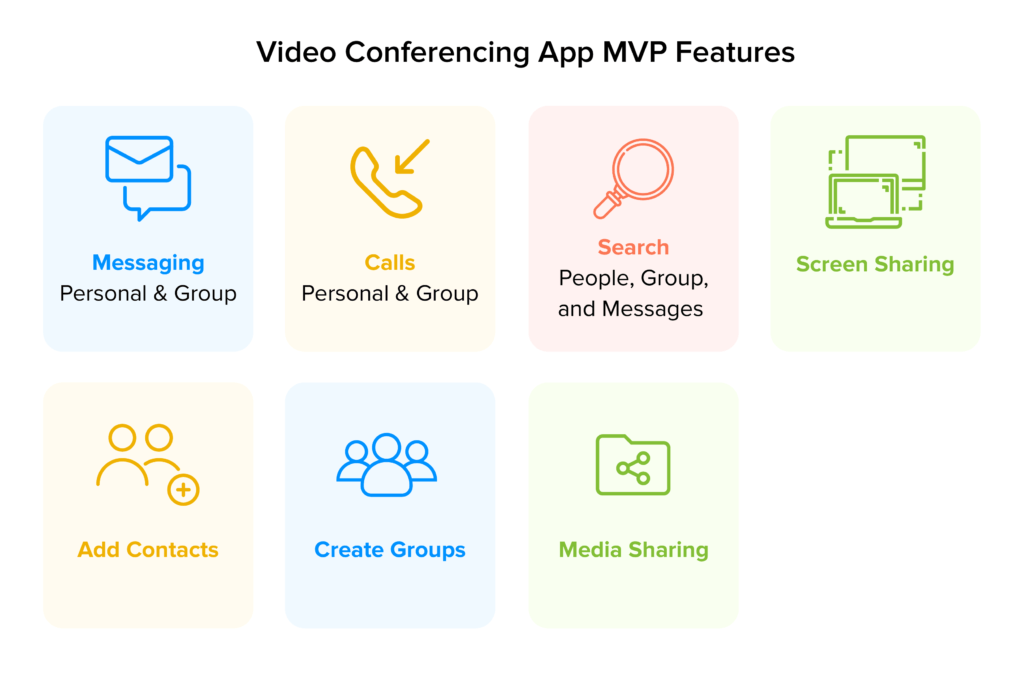 The business operations, courtrooms, classes, and lectures all are being conducted through video conferencing apps for almost a year now and the results are favorable.

The next obvious question would obviously be how does one create such a multifunctional app and how much does it cost. The answer can be found in the forthcoming sections.

How To Create A Video Conferencing App?

All these come together to create an app like Zoom and this is only about the development stage, more people will get involved in the launch and maintenance stages. The details of the technology used cannot be explained in brief, however, the basic development process is as follows:

All these technologies and software can naturally not be expected from one freelancer and hence a team effort is required for the same.

How Much Does it Cost to Develop A Video Conferencing App?

It is not possible to make an exact estimate of how much it will cost to create a video conferencing app. There are multiple steps performed by certified mobile app developers for hire to create the application from start to finish.

The several changes that take place from the ideation to the deployment stage and then finally to the delivery of the app can increase the costs as well.

Therefore, an exact figure is difficult to put forward, however, an overall idea can be calculated based on countries and respective industries. The cost is calculated for a minimum viable product (MVP) and a full-feature set.

With this, we have discussed the meaning and development of video conferencing apps like Zoom, Google Meet, and MS Teams, etc. The concept of video calls has existed since before the pandemic hit.

But during that time, Skype was the only true application to conduct professional meetings in the virtual world. Skype also had its limitations as per capacity and features.

But with the video conferencing app development industry getting more advanced apps like Zoom, they started to be widely used throughout the world by all types of professionals to conduct meetings and by students for online classes. Many students who had gone back to their homes due to the pandemic could now continue taking classes in international universities.

The technology for such apps is different from the technology used in video streaming app development. It is much more complex and is developed on its own server.

The technology is different and is capable of providing many more features than what one can expect from other video conferencing platforms. These apps allow the participation of up to 1000 people in one meeting.

Therefore, not only classes but seminars, competitions, panel discussions and all can take place without worrying about the spread of the disease. This has certainly changed the way the world will operate from now on.

Even when the world returns to its normal pre-covid life, all businesses and institutions will have a strong back-up plan for any unprecedented situations the world may face.

How Much Does It Cost To Create An E-Scooter Sharing App?

How To Take The Business Online With Ordering Applications

Hire an OTT App Development Company for Your Next Project

Modes of entertainment are constant in our social life. Peoples are adapting the platform from radios to televisions. And now after the pandemic peoples are...

How to Develop a Live Streaming App on iOS and Android?

After 2020, it is safe to say that live streaming services are the future for the audio, video and TV industries. Two among every three...

12 Google Products That are Expected to Roll Out in 2021

There is a whole new side of Google that is currently taking shape and as consumers, we simply need to sit back and watch while...

We have not created the wonders alone, there is also much contribution from our partnering agencies. Together we have created many milestones and some others are yet to come.

Tell us about your project

Let’s discuss your project and find out what we can do to provide value.